A total of four studies were included in this literature analysis. Chang (2015) reported the pooled results of two discontinued RCTs. Both studies (ROSEL trial and STARS trial) were open-label, randomised, phase 3 trials. In the ROSEL study, ten centres in the Netherlands participated. The STARS trial was performed in 28 sites in USA, China, and France. Both studies were closed early because of slow accrual. The number of included patients (n=58 patients) remained far below the anticipated enrolment (anticipated enrolment: 1030 patients in the STARS trial and 960 patients in the ROSEL trial). In these two trials, 31 patients were treated by stereotactic radiotherapy and 27 patients underwent surgery. Patients with peripherally located lesions received a total radiation dose of 54 Gy in three 18 Gy fractions. In patients with central lesions, 50 Gy in four 12.5 Gy fractions was used. Treatment delivery was recommended to be complete within 5 days of its initiation. A toxicity risk-adapted fractional scheme was used in which a total dose of 54 Gy in three 18 Gy fractions given over 5 to days; alternatively, a total dose of 60 Gy at five 12 Gy fractions was given over 10 to 14 days. Surgery included anatomic lobectomy by open thoracotomy or video-assisted thoracotomy.

Chen (2018) reported the results of a systematic review and meta-analysis of observational studies comparing SABR and surgery in early-stage NSCLC patients eligible for both SABR and surgery. The databases MEDLINE and Embase were searched until December 2016. Sixteen studies using a propensity score methodology were included in the meta-analysis (8 retrospective reviews, 5 surveillance studies, 2 studies using databases, 1 single arm trial). Surgery included lobectomy (9 studies), sublobar resection (6 studies), or surgery without further details on type of surgery (4 studies). No details on the used doses in SABR treatment were reported. Fourteen studies used matching to control for confounding. In the remaining studies covariate adjustment and inverse probability of treatment weighting were used. Fifteen studies with 19,882 patients were included in the primary meta-analysis for overall survival. Toxicity was not reported as an outcome in the systematic review by Chen (2018). After reading the original reports, we found that only four of the included studies reported toxicity in both treatment arms (Ezer, 2015; Verstegen, 2013; Crabtree, 2010; Robinson, 2013). Data on the number of patients with toxicity in each group were substracted from the original reports.

Wolff (2018) described the results in patients’ quality of life in two prospective cohorts of patients with stage I NSCLC who were treated either with SBRT or surgery. Data were from two hospitals in the Netherlands. 261 patients were treated by stereotactic radiotherapy, of whom 41 patients were included in the propensity score matched cohort (N=18 were treated with 5x12 Gy; N=15: 3x20 Gy; N=4: 3x18 Gy; N=4: 8x7.5 Gy). 41 patients underwent lobectomy (n=32 thoracotomy – lobectomy, n=5 VATS lobectomy, N=2 Bilobectomy, N=1 Wedge, N=1 Pneumonectomy). Health utility was measured with European Organisation for Research and Treatment of Cancer Quality of Life Questionnaire–Core 30 (QLQ-C30). The average health utility for the first year was calculated as the weighted average of baseline, 3, 6, and 12 months.

The pooled analysis of the two RCTs reported no significantly different risk of mortality after stereotactic radiotherapy as compared to surgery (HR=0.15 (0.02, 1.32), although the uncertainty is high. 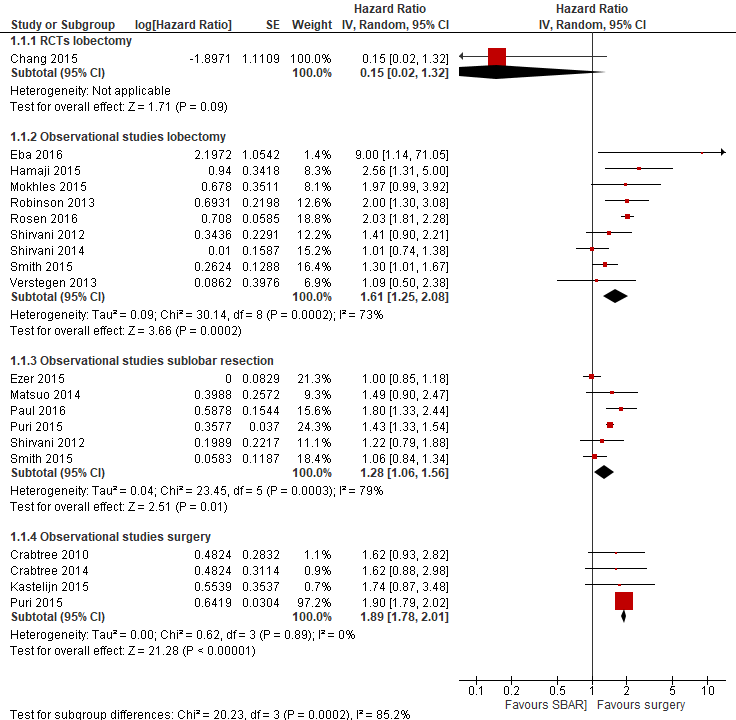 Four observational studies included in the systematic review by Chen (2018) reported on toxicity. The results are summarised in Table 1.

Verstegen (2013) also reported no treatment related deaths in patients treated with SBRT. Four patients (6.3%) experienced ≥grade 3 toxicity. The 30- and 90-day mortality after VATS resection was 1.6%, with one patient dying of multi-organ failure caused by septicemia due to thoracic empyema and bronchopleural fistulae. In the VATS cohort, fifteen patients (23.4%) experienced complications with grade 3 or higher toxicity.

Table 1 Number of patients with grade 3 or more toxicity, including treatment-related deaths

*) operative mortality was 1.9% (n=5); complications after surgery occurred in 94 patients, but severity (grade) was not reported

There are four levels of evidence: high, moderate, low, and very low. RCTs start at a high level of evidence and observational studies start at low.

The results on the overall survival were based on data from two very small RCTs and many observational studies. Therefore, the level of evidence for overall survival started at low was downgraded with 1 level because of limitations in the study design (Risk of bias), imprecision and heterogeneity.

The level of evidence for adverse events was downgraded with 1 level because of limitations in the study design (Risk of bias) and imprecision (small numbers of patients).

The level of evidence for quality of life was downgraded with 1 level because of limitations in the study design (Risk of bias) and imprecision (small numbers of patients).

A systematic review of the literature was performed to answer the following question:

What are the effects in terms of overall survival, quality of life and adverse events of surgery (lobectomy or sublobar resection) as compared to stereotactic radiotherapy in patients with stage I operable NSCLC?

The working group considered overall survival a critical outcome measure for the decision-making process and quality of life and adverse events as important outcome measures for decision making.

The databases Medline (via OVID) and Embase (via Embase.com) were searched up to 6th of July 2018 using relevant search terms for systematic reviews (SRs), randomized controlled trials (RCTs) and observational studies (OBS). The detailed search strategy is depicted under the tab Methods. The search resulted in 226 hits. Studies were selected based on the following criteria: systematic review, randomized trials or cohort studies including patients with stage I NSCLC comparing stereotactic radiotherapy with surgery. 22 studies were initially selected based on title and abstract. After reading the full text articles, 18 studies were excluded (see the table with reasons for exclusion under the tab Methods). Four articles were included in the literature summary. Important study characteristics and results are depicted in the evidence tables. The assessment of the risk of bias is depicted in the risk of bias tables.

Research question: what are the effects (overall survival, quality of life and adverse events) of surgery (lobectomy or sublobar resection) as compared to stereotactic radiotherapy in patients with stage I operable NSCLC ?

This table is also suitable for diagnostic studies (screening studies) that compare the effectiveness of two or more tests. This only applies if the test is included as part of a test-and-treat strategy – otherwise the evidence table for studies of diagnostic test accuracy should be used.