Motivation for development of the guidelines

Clinical practice has become more complex and difficult because of the enormous increase in knowledge and research. For this reason, guidelines are becoming more important in clinical practice and are helping clinicians to take the right clinical decisions. The increasing number of guidelines forces guideline developers to find innovations that will make guideline development feasible in the coming years. One of these innovations is to develop guidelines not only for one country but to collaborate with several countries and divide the efforts and costs across the participating countries.

The guideline focuses on several obstetric topics for which no national guideline was available in any of the four participating countries at the start of the project (2018). The following subjects were addressed: umbilical cord prolapse, corticosteroids for planned caesarean sections after 34 weeks of gestation, antenatal care and induction of labour for women with pregnancies after IVF/ICSI.

Intended audience for the guideline

The guideline aims to provide practical guidance for health care providers in maternity settings. Patient information is currently being developed.

The Board of the Dutch Society of Obstetrics and Gynaecology (NVOG) will assess whether these guidelines are still up-to-date in 2026 at the latest. If necessary, a new working group will be appointed to revise the guideline. The guideline’s validity may lapse earlier if new developments demand revision at an earlier date.

An international panel for the development of the guidelines was formed in 2019. The panel consisted of representatives from all relevant medical disciplines that are involved in medical care for pregnant women.

All panel members have been officially delegated for participation in the guideline development panel by their (scientific) societies. The panel developed the guidelines in the period from May 2019 until March 2021.

The guideline development panel is responsible for the entire text of this guideline.

The Code for the prevention of improper influence due to conflicts of interest was followed (https://storage.knaw.nl/2022-08/Code-for-the-prevention-of-improper-influence-due-to-conflicts-of-interest.pdf).

The working group members have provided written statements about (financially supported) relations with commercial companies, organisations or institutions related to the subject matter of the guideline during the past three years. Furthermore, inquiries have been made regarding personal financial interests, interests due to personal relationships, interests related to reputation management, interest related to externally financed research and interests related to knowledge valorisation. The chair of the guideline development panel is informed about changes in interests during the development process. The declarations of interests are reconfirmed during the commentary phase. The declarations of interests can be requested at the administrative office of the Knowledge Institute of the Dutch Association of Medical Specialists and are summarised below.

Representation of the patient perspective

Involvement of patient representatives from all four participating countries was challenging. Representatives of patient organisations from three countries (UK, Belgium, the Netherlands) commented on the draft guideline texts and discussed these during an online meeting. They represented the RCOG Women’s Network, the Flemish organisation for people with fertility problems ‘De verdwaalde ooievaar’, the Netherlands Patient Federation, and the Dutch association for people with fertility problems ‘Freya’. The comments were discussed and where relevant incorporated by the guideline development panel.

Guideline implementation and practical applicability of the recommendations was taken into consideration during various stages of guideline development. Factors that may promote or hinder implementation of the guideline in daily practice were given specific attention.

The guideline is distributed digitally among all relevant professional groups. The guideline can also be downloaded from the following websites: www.nvog.nl, www.vvog.be, www.rcog.org.uk, www.dggg.de,and the Dutch guideline website: www.richtlijnendatabase.nl.

This guideline has been developed conforming to the requirements of the report of Guidelines for Medical Specialists 2.0 by the advisory committee of the Quality Counsel. This report is based on the AGREE II instrument (Appraisal of Guidelines for Research & Evaluation II) (www.agreetrust.org)(Brouwers, 2010), a broadly accepted instrument in the international community and on the national quality standards for guidelines: “Guidelines for guidelines” (www.zorginstituutnederland.nl).

During the initial phase of the guideline development the chairman, guideline development panel and the advisor inventoried the relevant subject matter for the guideline. Since this was a pilot project, the content of the questions and the support base in clinical practice was considered of less importance than the process of international collaboration and learning from each other. Key questions were selected in such a way that:

Strategy for search and selection of literature

For the separate clinical questions, specific search terms were formulated and published scientific articles were searched for in (several) electronic databases. Furthermore, studies were scrutinized by cross-referencing for other included studies. The studies with potentially the highest quality of research were searched for first. The panel members selected literature in pairs (independently of each other) based on title and abstract. A second selection was performed based on full text. The databases, search terms and selection criteria are described in the modules containing the clinical questions.

Individual studies were systematically assessed, based on methodological quality criteria that were determined prior to the search, so that risk of bias could be estimated. This is described in the “risk of bias” tables.

The relevant research findings of all selected articles are shown in evidence tables. The most important findings in literature are described in literature summaries. In case there were enough similarities between studies, the study data were pooled.

Grading quality of evidence and strength of recommendations

The strength of the conclusions of the scientific publications was determined using the GRADE-method. GRADE stands for Grading Recommendations Assessment, Development and Evaluation (see http://www.gradeworkinggroup.org/).

GRADE defines four gradations for the quality of scientific evidence: high, moderate, low or very low. These gradations provide information about the amount of certainty about the literature conclusions (http://www.guidelinedevelopment.org/handbook/).

GRADE distinguishes four levels for the quality of the scientific evidence: high, moderate, low and very low. These levels refer to the amount of certainty about the conclusion based on the literature, in particular the amount of certainty that the conclusion based on the literature adequately supports the recommendation (Schünemann, 2013; Hultcrantz, 2017).

For the wording of the conclusions we used the statements suggested by the GRADE working group (Santesso, 2020), as shown below. 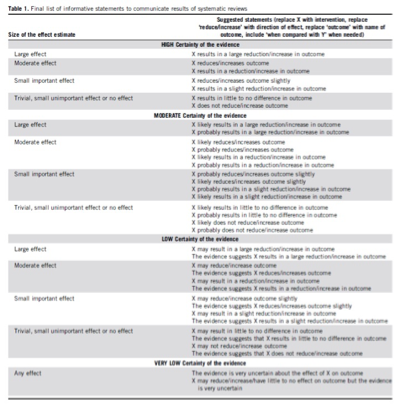 Aspects such as expertise of working group members, patient preferences, costs, availability of facilities, and organisation of healthcare aspects are important to consider when formulating a recommendation. For each clinical question, these aspects are discussed in the paragraph Considerations, using a structured format based on the evidence-to-decision framework of the international GRADE Working Group (Alonso-Coello, 2016a; Alonso-Coello, 2016b). The evidence-to-decision framework is an integral part of the GRADE methodology.

During the development of this guideline, systematic searches were conducted for research contributing to answering the primary questions. For each primary question, the working group determined whether (additional) scientific research is desirable.