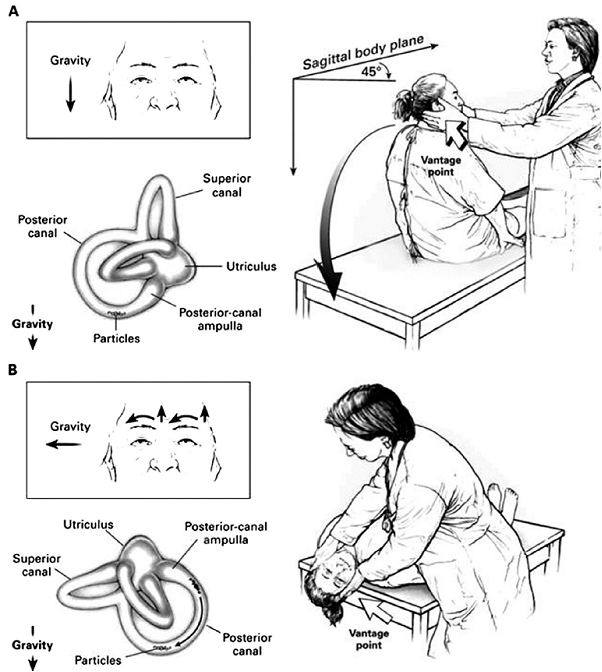 Diagrammatic representation of performance of the Dix-Hallpike maneuver for the diagnosis of posterior canal BPPV (adapted from Furman et al., 1999). (A) The examiner stands at the patient’s right side and rotates the patient’s head 45 degrees to the right to align the right posterior semicircular canal with the sagittal plane of the body. (B) The examiner moves the patient, whose eyes are open, from the seated to the supine right-ear-down position and then extends the patient’s neck slightly so that the chin is pointed slightly upward. The latency, duration, and direction of nystagmus, if present, and the latency and duration of vertigo, if present, should be noted. The arrows in the inset depict the direction of nystagmus in patients with typical benign paroxysmal positional vertigo. A presumed location in the labyrinth of the free-floating debris thought to cause the disorder is also shown.

Posterior semicircular canal BPPV is diagnosed when 1) patients report a history of vertigo provoked by changes in head position relative to the gravity vector and 2) when, on physical examination, characteristic nystagmus is provoked by the Dix-Hallpike maneuver (Table 2.1).

Vertigo has been defined as an “illusory sensation of motion of either the self or the surroundings.” (Blakley, et al., 2001) The symptoms of vertigo resulting from posterior canal BPPV are typically described by the patient as a rotational or spinning sensation when the patient changes head position relative to gravity.

Other authors have loosened the historical criteria required for BPPV diagnosis with coinage of the term “subjective BPPV” without a positive Dix-Hallpike test (Haynes, et al., 2002) (Numez, et al., 2000). However, in clinical practice, there is a practical need to balance inclusiveness of diagnosis with accuracy of diagnosis.

The latency period for the onset of the nystagmus with this maneuver is largely unspecified in the literature, but the panel felt that a typical latency period would range from 5 to 20 seconds, although it may be as long as 1 minute in rare cases (Baloh, et al., 1987). Second, the provoked subjective vertigo and the nystagmus increase, and then resolve within a time period of 60 seconds from the onset of nystagmus.

The fast component of the nystagmus provoked by the Dix-Hallpike maneuver demonstrates a characteristic mixed torsional and vertical movement (often described as upbeating-torsional), with the upper pole of the eye beating toward the dependent ear and the vertical component beating toward the forehead (Fig 2.1) (Furman, et al., 1999) (Honrubia, et al., 1999). Temporally, the rate of nystagmus typically begins gently, increases in intensity, and then declines in intensity as it resolves. This has been termed crescendo-decrescendo nystagmus. The nystagmus is again commonly observed after the patient returns to the upright head position and upon arising, but the direction of the nystagmus may be reversed.

Another classical feature of the nystagmus associated with posterior canal BPPV is that the nystagmus typically fatigues (a reduction in severity of nystagmus) when the maneuver is repeated (Dix, et al., 1952) (Honrubia, et al., 1999). However, repeated performance of the Dix-Hallpike maneuver to demonstrate fatigability is not recommended, because it unnecessarily subjects patients to repeated symptoms of vertigo that may be discomforting, and repeat performance may interfere with the immediate bedside treatment of BPPV (Furman, et al., 1999). Therefore, the panel did not include fatigability of the nystagmus as a diagnostic criterion.

The Dix-Hallpike maneuver is performed by the clinician moving the patient through a set of specified head-positioning maneuvers to elicit the expected characteristic nystagmus of posterior canal BPPV (Fig 2.1) (Furman, et al., 1999) (Dix, et al., 1952). Before beginning the maneuver, the clinician should counsel the patient regarding the upcoming movements and warn that they may provoke a sudden onset of intense subjective vertigo, possibly with nausea, which will subside within 60 seconds. Because the patient is going to be placed in the supine position relatively quickly with the head position slightly below the body, the patient should be oriented so that, in the supine position, the head can “hang” with support off the posterior edge of the examination. The examiner should ensure that he can support the patient’s head and guide the patient through the maneuver safely and securely, without the examiner losing support or balance himself.

1. The maneuver begins with the patient in the upright seated position with the examiner standing at the patient’s side (Furman, et al., 1999). If present, the patient’s eyeglasses should be removed. We initially describe the maneuver to test the right ear as the source of the posterior canal BPPV.

2. The examiner rotates the patient’s head 45 degrees to the right and, with manual support, maintains the 45-degree head turn to the right during the next part of the maneuver.

3. Next, the examiner fairly quickly moves the patient (who is instructed to keep the eyes open) from the seated to the supine right-ear down position and then extends the patient’s neck slightly (approximately 20 degrees below the horizontal plane) so that the patient’s chin is pointed slightly upward, with the head hanging off the edge of the examining table and supported by the examiner. The examiner observes the patient’s eyes for the latency, duration, and direction of the nystagmus (Norre, et al., 1988) (White, et al., 2005). Again, the provoked nystagmus in posterior canal BPPV is classically described as a more or less mixed torsional movement with the upper pole of both eyes beating toward the affected  ear (in this example the right ear) in combination with a vertical (upbeat) component. The patient should also be queried as to the presence of subjective vertigo.

Factors that may affect the diagnostic accuracy of the Dix-Hallpike maneuver include the speed of movements during the test, time of day, and the angle of the plane of the occiput during the maneuver (Numez, et al., 2000). The Dix-Hallpike test must be done bilaterally to determine which ear is involved or if both ears are involved (Numez, et al., 2000). In a small percent of cases, the Dix-Hallpike maneuver may be bilaterally positive (ie, the correspondingly appropriate nystagmus is elicited for each ear in the dependent position). For example, bilateral posterior canal BPPV is more likely to be encountered after head trauma (Katsarkas, et al., 1999).

should be careful to consider the risk of stroke or vascular injury in patients with significant vascular disease (Whitney, et al., 2006). Care should also be exercised in patients with cervical stenosis, severe kyphoscoliosis, limited cervical range of motion, Down syndrome, severe rheumatoid arthritis, cervical radiculopathies, Paget’s disease, ankylosing spondylitis, low back dysfunction, spinal cord injuries, and morbid obesity (Whitney, et al., 2005) (Whitney, et al., 2006). Patients who are obese may be difficult for a single examiner to fully support throughout the maneuver, so additional assistance may be required. For patients with physical limitations, special tilting examination tables may allow the safe performance of the Dix-Hallpike maneuver.

To our knowledge, no comparative studies have been performed so far to investigate whether the diagnostic accuracy of the Hallpike maneuver with observation of the nystagmus by the naked eye improves by the use of Frenzel’s glasses or infra-red Video-Oculography.