This module consists of six submodules.

The board of the Radiological Society of the Netherlands will determine at the latest in 2023 if this guideline (per module) is still valid and applicable. If necessary, a new working group will be formed to revise the guideline. The validity of a guideline can be shorter than 5 years, if new scientific or healthcare structure developments arise, that could be seen as a reason to commence revisions. The Radiological Society of the Netherlands is considered the keeper of this guideline and thus primarily responsible for the actuality of the guideline. The other scientific societies that have participated in the guideline development share the responsibility to inform the primarily responsible scientific society about relevant developments in their field.

The guideline is submitted for authorization to

Goal of the current guideline

The aim of the Part 1 of Safe Use of Iodine-containing Contrast Media guidelines is to critically review the present recent evidence with the above trend in mind, and try to formulate new practical guidelines for all hospital physicians to provide the safe use of contrast media in diagnostic and interventional studies. The ultimate goal of this guideline is to increase the quality of care, by providing efficient and expedient healthcare to the specific patient populations that may benefit from this healthcare and simultaneously guard patients from ineffective care. Furthermore, such a guideline should ideally be able to save money and reduce day-hospital waiting lists.

Users of this guideline

This guideline is intended for all hospital physicians that request or perform diagnostic or interventional radiologic or cardiologic studies for their patients in which CM are involved.

A multidisciplinary working group was formed for the development of the guideline in 2014. The working group consisted of representatives from all relevant medical specialization fields that are involved with intravascular contrast administration.

The working group is responsible for the complete text of this guideline.

The working group members have provided written statements about (financially supported) relations with commercial companies, organisations or institutions that are related to the subject matter of the guideline. Furthermore, inquiries have been made regarding personal financial interests, interests due to personal relationships, interests related to reputation management, interest related to externally financed research and interests related to knowledge valorisation. The statements on conflict of interest can be requested at the administrative office of the Knowledge Institute of Medical Specialists and are summarised below.

During the initial phase of the guideline development, the chairman, working group and the advisor inventory the relevant subject matter for the guideline. Furthermore, an Invitational Conference was organized, where additional relevant subjects were suggested by the Dutch Kidney Patient Association, Dutch Society for Emergency Physicians, and Dutch Society for Urology. A report of this meeting can be found in Related Products.

Strategy for search and selection of literature

For the separate clinical questions, specific search terms were formulated and published scientific articles were sought after in (several) electronic databases. Furthermore, studies were looked for by cross-referencing other included studies. The studies with potentially the highest quality of research were looked for first. The working group members selected literature in pairs (independently of each other) based on title and abstract. A second selection was performed based on full text. The databases search terms and selection criteria are described in the modules containing the clinical questions.

Individual studies were systematically assessed, based on methodological quality criteria that were determined prior to the search, so that risk of bias could be estimated. This is described in the “risk of bias” tables.

The relevant research findings of all selected articles are shown in evidence tables. The most important findings in literature are described in literature summaries. When there were enough similarities between studies, the study data were pooled.

Grading the strength of scientific evidence

A) For intervention questions

The strength of the conclusions of the scientific publications was determined using the GRADE-method. GRADE stands for Grading Recommendations Assessment, Development and Evaluation (see http://www.gradeworkinggroup.org/) (Atkins, 2004).

GRADE defines four gradations for the quality of scientific evidence: high, moderate, low or very low. These gradations provide information about the amount of certainty about the literature conclusions. (http://www.guidelinedevelopment.org/handbook/). 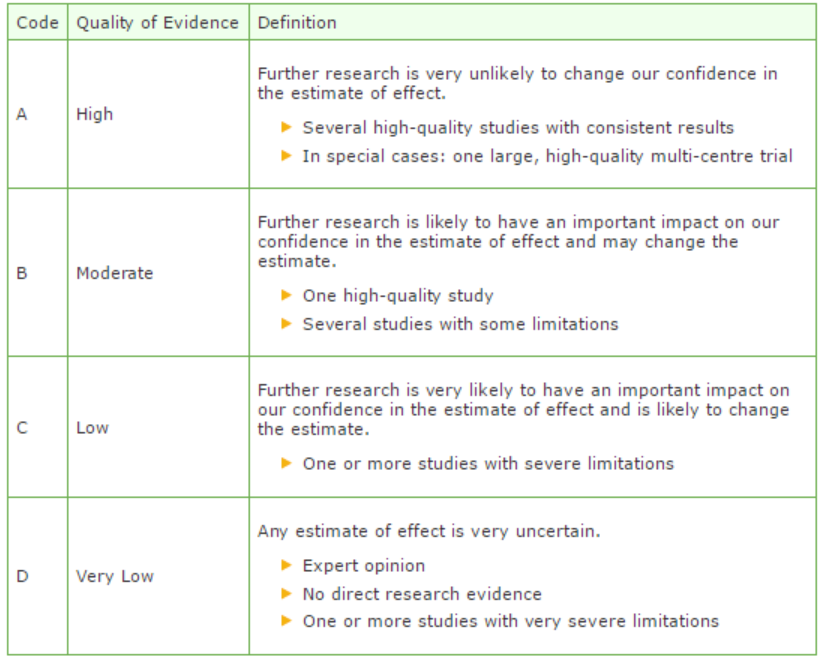 B) For diagnostic, etiological, prognostic or adverse effect questions, the GRADE-methodology cannot (yet) be applied. The quality of evidence of the conclusion is determined by the EBRO method (van Everdingen, 2004)

For diagnostic, etiological, prognostic or adverse effect questions, the evidence was summarized in one or more conclusions, and the level of the most relevant evidence was reported. For intervention questions, the conclusion was drawn based on the body of evidence (not one or several articles). The working groups weighed the beneficial and harmful effects of the intervention.

Aspects such as expertise of working group members, patient preferences, costs, availability of facilities, and organization of healthcare aspects are important to consider when formulating a recommendation. These aspects were discussed in the paragraph Considerations.

The recommendations answer the clinical question and were based on the available scientific evidence and the most relevant considerations.

During the development of the outline of the guideline and the rest of the guideline development process, the organization of healthcare was explicitly taken into account. Constraints that were relevant for certain clinical questions were discussed in the Consideration paragraphs of those clinical questions. The comprehensive and additional aspects of the organization of healthcare were discussed in a separate chapter.

Internal (meant for use by scientific society or its members) quality indicators are developed simultaneously with the guideline. Furthermore, existing indicators on this subject were critically appraised; and the working group produces an advice about such indicators. Additional information on the development of quality indicators is available by contacting the Knowledge Institute for Medical Specialists. (secretariaat@kennisinstituut.nl).

During the development of the guideline, a systematic literature search was performed the results of which help to answer the clinical questions. For each clinical question the working group determined if additional scientific research on this subject was desirable. An overview of recommendations for further research is available in the appendix Knowledge Gaps.